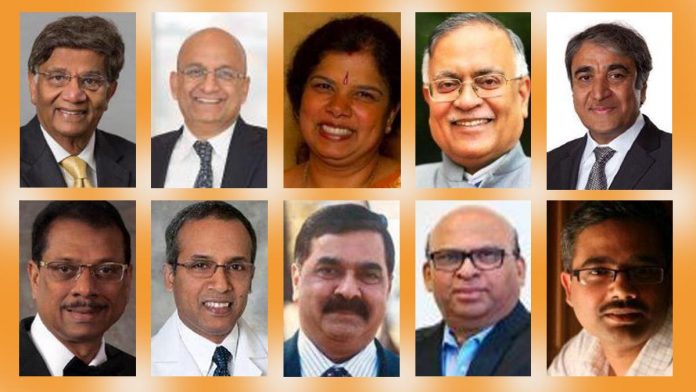 New York: Indo-American Press Club, announces its list of international excellence award winners ahead of is seventh international media conference. Sal Bhavana award went to “Wheels Global Foundation (WGF) an organization which partners with international organizations and NGOs to improve the living conditions of underprivileged through implementation of sustainable programs.

The lifetime achievement award Karma Shreshta was awarded to eminent cardiologist Dr. Vinod K. Shah. Dr. Shah, who received his medical degree from Bombay University, completed his cardiology training at Georgetown Hospital and Virginia Hospital. Dr. Shah who relocated to Southern Maryland 35 years ago with his wife, Dr. Ila Shah, a Pediatrician and his brother, Dr. U.K. Shah, a Gastroenterologist founded Shah Associates. Apart from being a well-known Cardiologist in Southern Maryland and Washington, D.C., Vinod has worked very closely with many community organizations such as St. Mary’s Ryken High School, St. Mary’s College, and the Rotary Club of Charlotte Hall. His passion is to provide the best healthcare with an emphasis on the early detection and prevention of diseases.

Current Dean of Harvard Business school Nitin Nohria was awarded the SathKarma award. Nitin Nohria, an Indian-American academic, who is serving as the tenth and current dean of Harvard Business School, is also the George F. Baker Professor of Administration. Mr. Nohria argued that President Donald Trump’s support for ‘isolationism’ was detrimental to American economic prosperity, as it discouraged successful foreigners from immigrating to the United States. Mr. Nohria, who has a PhD in Management from MIT, is working with fellow HBS professor Rakesh Khurana, the World Economic Forum and the Aspen Institute to create a business oath, like the MBA Oath, that might be used globally.

Executive Director of Ekal Vidyalaya Ranjani Saigal share the SathKarma award with Mr Nohria. She has worked in the field of Education Technology for over 25 years at the Massachusetts Institute of Technology (MIT) and Tufts University. She facilitated the development, piloting and deployment of several teaching learning tools and has several publications to her credit. She is a strong believer in the power of philanthropy and social entrepreneurship to transform the lives of underprivileged people around the world.

Ms. Saigal is the co-founder of a bi-weekly South Asian e-magazine, Lokvani.com, and has won many awards including the India New England Woman of the Year award in 2012 and was honored by Governor Deval Patrick for her contributions to the Arts and Indian Cultural Heritage in Massachusetts. A well-trained classical dancer, Saigal has created several Bharatanatyam dance dramas including Ramayana, Savitri, Markendeya and Dancing Nature’s Art, a unique concept where Bharatanatyam is used to explain the scientific concept of DNA.

The Excellence in Literature Award winner is Ambassador Pradeep Kumar Kapur, an acknowledged “luminary diplomat,” with a distinguished career working with leaders and policymakers around the world. Author of “Beyond CoVID-19 Pandemic: Envisioning a Better World by Transforming the Future of Healthcare”, he was the Ambassador of India to Chile and to Cambodia. His healthcare contributions include setting up the acclaimed bilateral India Nepal initiative, the BP Koirala Institute of Health Sciences.

Additionally, he brings decades of global public policy experience and historical perspectives to the solutions that make Beyond the COVID-19 Pandemic: Envisioning a Better World by Transforming the Future of Healthcare unique. A graduate of the globally acclaimed Indian Institute of Technology, Delhi (IIT-D), he is also the Executive Director of Smart Village Development Fund (SVDF) at the WHEELS Global Foundation.

Chancellor of University of California Pradeep Kumar Khosla was awarded the Excellence in Technology & Education Award. Khosla’s accomplishments include being Dean of the Carnegie Mellon College of Engineering and the Philip and Marsha Dowd University Professor of Electrical and Computer Engineering and Robotics at Carnegie Mellon. He also held several administrative and leadership positions at CMU including: Founding Director, Carnegie Mellon CyLab; Head, Department of Electrical and Computer Engineering; Director, Information Networking Institute; and Founding Director, Institute for Complex Engineered Systems (ICES).

Khosla’s research has resulted in three books and more than 350 journal articles and conference and book contributions. Khosla is a frequent keynote speaker at international conferences organized by Fortune Magazine and the World Economic Forum amongst others. A recipient of several awards including the ASEE George Westinghouse Award for Education in 1999, the Silicon-India Leadership award for Excellence in Academics and Technology, Khosla was appointed as the chair of the Association of Public and Land-grant Universities’ Commission on Innovation, Competitiveness and Economic Prosperity which under his charged produced a landmark report on university innovation, ‘Technology Transfer Evolution: Driving Economic Prosperity.’

Excellence in Leadership awardee Dr. Sudhakar Jonnalagadda MD is a Gastroenterology Specialist in Douglas, GA and has over 40 years of experience in the medical field. Known as Dr. S Jonna locally, he practices Gastroenterology and Transplant Hepatology in Douglas, GA and is an active member of the Coffee Regional Medical Center staff. Dr. Jonnalagadda, a former Assistant Professor at the Medical College of Georgia, was the President of Coffee Regional Medical Staff 2018, and served as the Director of Medical Association of Georgia Board from 2016 onwards. Dr. Jonnalagadda also served as the President of Georgia Association of Physicians of Indian Heritage 2007-2008, and was the past Chair of Board of Trustees, GAPI. He was the Chairman of the Medical Association of Georgia, IMG Section, and was a Graduate, Georgia Physicians Leadership Academy (advocacy training). Recently, the American Association of Physicians of Indian Origin (AAPI), announced him as their 37th President.

Dr. Sunil D. Kumar, the recipient of Humanitarian Award, works in Plantation, Florida and 2 other locations and specializes in Critical Care Medicine, Pulmonary Disease and Sleep Medicine. Dr. Kumar who is affiliated with Broward Health Medical Center, Kindred Hospital Fort Lauderdale and Westside Regional Medical Center, published a paper “Novel scoring system to Predict the need for ventilator use in COVID-19 patients”, which would help to determine the need for different therapy strategies for CoVID patients. Dr. Kumar’s credentials include President, Heart and Lung Associates, PA, Chairman, Medical Credentialing & Utilization Review. He is also a member of various medical associations.

This year’s Community Service Award was shared by Satish Korpe and Madhavan Nair. C.E.O. at Potomac Engineers Inc Sathish Korpe is actively involved in issues related to small business in and around Maryland and Virginia. Active in the local organizations, Mr. Korpe is also the past resident of Indian American Forum for Political Education, Member Virginia Asian Chamber of Commerce, and was on the Board of Safety and Health Codes Board Commonwealth of Virginia.

Madhavan B Nair popularly known as MBN is an entrepreneur who is always on the move when it comes to serving our community. MBN, a chartered Financial Consultant by profession, he is the President of FOKANA 2018-2020. During this time he has initiated various current and contingent projects like Kerala flood relief, Build Kerala, Angel connect, Student start up projects with flowers TV, world Malayalee connect 2020. He is instrumental for the FOKANA Housing project joined with Bhavanam foundation of Kerala Government for 100 houses in 10 districts in Kerala. MBN has been awarded for the prestigious “Velu Thampy Dhalawa National Award” in 2018, for his community and social service.

MBN has been awarded as the best Trans-Atlantic leader by UUKMA (union of UK Malayalee associations) the umbrella organization in Feb 2020 at London. MBN also has been awarded the Adi Shakara Excellence award 2019 by Adi Shankara Group of Kerala, Kaladi, for his outstanding contribution in the community. He is also the founder and chairman of NAMAM ( North American Malayalees and Associated Members) in NJ USA. A socio cultural charity organization, NAMAM excellence award is proud signature event in USA.

Last but not the least, the IAPC Media Excellence Award this year goes to Lalit K Jha, the Chief US Correspondent for Press Trust of India (PTI), the largest news agency of India subscribed by over 500 newspapers as well as scores of TV channels and radio stations. Based in Washington D.C. Metro Area, Lalit extensively covers the White House, the State Department and US Congress from an Indian perspective, besides writing on Indian Americans. During his over 15 years of experience as a prolific journalist, Lalit has worked for NDTV.com, The Indian Express – North American Edition, and has been a correspondent for publications in Afghanistan and Myanmar.