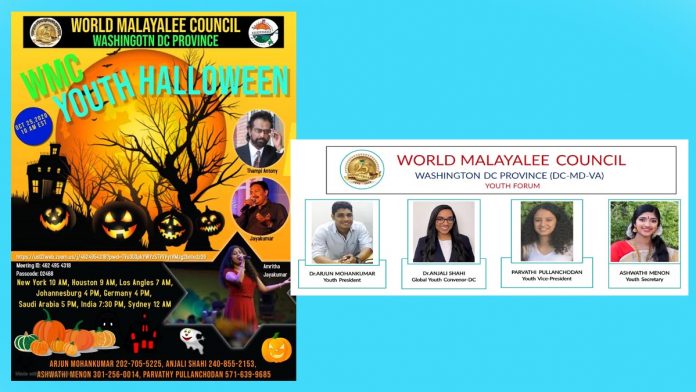 Youth Forum of World Malayalee Council Washington DC Province celebrated the Halloween Festival through a fantastic Zoom meeting on October 25, 2020. On a beautiful Fall season raining morning, and the auspicious Mahanavami Day, Dr. Madhu Nambiar, Secretary of WMC Washington DC province welcomed all the guests on behalf of the Province President Mohankumar Arumugham and the office bearers. Dr. Nambiar indicated that the youth program was mainly organized and moderated by the youth team of Washington DC Province and is centered around the Halloween Festival to share the knowledge of American Culture between malayalees across the globe and to provide an opportunity for the youth to develop leadership skills to be competitive in the world .

Dr. Arjun Mohankumar, Youth President, WMC Washington DC Province provided the Presidential address and explained the future activities his team planned for the youth and requested everyone to join together for teamwork and support. Dr. Anjali Shahi, Gobal Youth Convener for WMC Washington DC Province, addressed the viewers and briefly mentioned about the Halloween program and reiterated the importance of wearing mask, hand washing, and social distancing to protect against the Covid 19.

Noted Indo American Film Actor, Writer, Activist and Producer Shri Tampi Antony served as the Chief Guest for the occasion and delivered an inspirational message to the youth. In his key note he said these types of associations and programs provide abundant opportunities for youth to grow and they should utilize these to shape their future. He also mentioned the role of similar associations that played considerable role to shape his future and advised the youth to remain active and seize the opportunity to excel and build confidence among them.

Youth team played some videos to educate the community about the history of the Halloween Festival and the costumes people usually wear during this celebration to go for “Trick or Treat.” The traditional Halloween specialty Pumpkin carving and making Jack-o-Lantern was also demonstrated during the program. The presentation of Halloween cookies, candies and varieties of food preparation by Dr. Anjali Shahi and Aathira Shahi were well appreciated by everyone. Dr. Anjaliand AthiraShahiarethe daughter of Kala Shahi, the Entertainment chair of WMC Washington DC province.

The program also included cultural extravaganza from the youth community in Washington DC area and associated members followed by Ganamela with playback singer Amrutha Jayakumar and Dr. N. Jayakumar Retired Professor, Women’s college Thiruvananthapuram was also a highlight of the event. The artists impressed the youth by a mixture of western and Indian songs and the melodious voice. There was also an opportunity for feedback discussion from the participants all over the world. The program was concluded after a vote of thanks from Dr. Madhu Nambiar, Secretary of Washington DC province.